The date is November 7, 2016. Wellesley High boys soccer has just lost a 1-0 heartbreaker in overtime to arch rival Needham in the Division I South quarterfinals.

“It’s tough,” said head coach Tim Mason. “These guys fought through so much this year. I couldn’t be more proud of the way they battled tonight. We will be back.”

This season, Wellesley was awarded the No. 5 seed in Division I South after going 10-3-2, winning the Bay State Herget Division, and ending the regular season on an eight-game winning streak. The last time Wellesley lost a game? September 27, 1-0 against Needham. 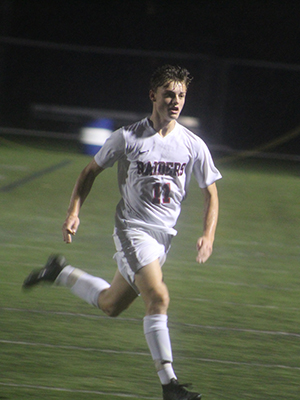 Oskar Haberlain (11) tracks down a loose ball for Wellesley. Photos by Michael Flanagan

Meanwhile, the perennial power Rockets finished the regular season at 12-2-6 and ran away with the Carey Division.

In the first round, the Raiders took down familiar foe and No. 12-seeded Weymouth, the team that ousted Wellesley from the tournament in penalty kicks on their home turf in 2017, 2-1 in overtime. Needham, meanwhile, earned a 1-0 win over No. 13 Marshfield in the first round.

Almost exactly two years to the day of the 2016 season-ending defeat at Memorial Field, Mason’s promise of Wellesley getting back for a shot at Needham in the postseason came to fruition. The No. 5 Raiders and No. 4 Rockets met on a rain-soaked Memorial Field in the South quarterfinals on Monday night.

The wet and cold conditions forced both teams to play extremely conservatively, as neither side was able to generate any significant scoring opportunity throughout the first half. With the game still scoreless at the end of regulation, extra time was needed to decide who would advance to face the winner of Tuesday’s match between No. 1 Silver Lake and No. 2 Hingham.

Just like all of regulation, neither team was able to generate much offense in the extra period. With the game still scoreless after two 10-minute overtimes, Needham and Wellesley required penalty kicks to decide the match.

Owen DeOliveira, Nick Kolb, and Brendan Clare all nailed their tries for Wellesley to begin the penalty kicks, while Needham had one sail over the crossbar to start it off, followed by Wellesley keeper Ethan Liss-Roy making a diving save to his right to rob Alejandro Agualimpia-Cadavid on Needham’s third try to give the Raiders a 3-1 overall lead (best of five). 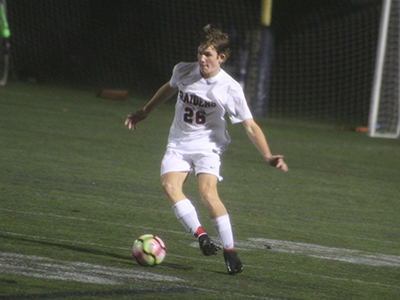 With their backs against the wall, Needham needed their keeper, senior Will Popper, to come up big in order to extend the match. Popper dove to his left and made a sprawling save on Oskar Haberlain to keep Needham alive, followed by a goal from Sam Keenan to cut the deficit to 3-2. Needing a save once again just to extend the match in the top of the fifth, Popper again came up huge, kicking away the ball for the save on Chris Kolb to stun the Wellesley students readying to storm the field in celebration. The shootout was tied at three apiece. With Needham being given the chance to win it, the Rockets opted to have Popper try and finish it off with the final kick in the bottom of the fifth. However, Popper’s shot sailed above the crossbar and the match required bonus penalty kick rounds.

Both teams sank their tries in the sixth round. After Maxwell Stakun-Pickering converted his try for Wellesley in the top of the seventh, Needham’s final attempt sailed right of the post and wide, sealing the win for Wellesley. The Raiders and their fans stormed the field in celebration.

“It’s about time we got one of those,” said Mason following the victory. “I’m just happy for those boys, you can see what it means to all of them winning like that, and it makes me really proud as a coach to see all the hard work they’ve put in pay off with big playoff wins like tonight. I thought emotions maybe got to us a little bit early in that first half. We calmed down a little bit and got back to our ways and got the result. Needham’s a great team and we’re really fortunate to come out with the win tonight. Obviously, they have a ton of talent over there and they did exceptionally well this season, winning their side of the conference.”

As for the performance of Stakun-Pickering during the penalty kicks, Mason says the freshman has shown a lot of promise throughout the season and has become one of the more clutch players on Wellesley’s roster.

“Performances like tonight are why he started every game for us this season,” said Mason. “He’s a smart player who knows the game exceptionally well and he’s clutch - I think he showed it perfectly tonight stepping up and delivering that goal when we needed it.”