Over 250 eager senior students crossed the Walpole High parking lot onto the Turco Field to accept their high school diplomas. Even though this past Sunday was grey and cloudy, the students’ smiles shined brighter than the sun. 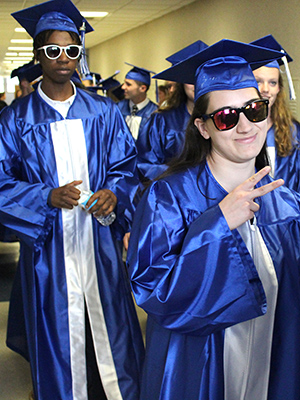 Parents anxiously waited as their children strutted down the path towards the football field. Joanne Cuddy, mother of graduate David Cuddy, was so excited to see her son that she made sure to get the perfect spot to snap a picture and watch her son step towards his bright future.

The seniors were led by junior class officers William Porter (President) and Celia Walsh (Vice President), and were greeted by the Walpole High Concert Band. After the Concert Choir’s beautiful rendition of the “Star Spangled Banner,” senior class president Nathaniel Kelley welcomed the crowd and wished good luck to his peers.

In her speech, valedictorian Emily Martin quoted Forrest Gump’s famous line: “Life’s like a box of chocolates - you never know what you’re gonna get.”

Principal Stephen Imbusch, took the stand and presented a honorary diploma to the late Tommy Quinn. His parents, Julie and Thomas, accepted the diploma to a tremendous standing ovation. Across the field, white balloons were released into the sky in honor of Tommy. 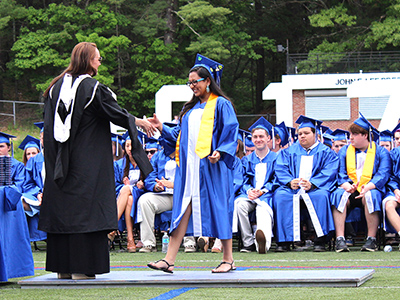 Soon, one by one, the delighted students criss crossed the field and accepted their diplomas. They turned their tassels over and threw their caps into the sky. After catching their personal confetti, the students filed out of the field, greeted parents and friends, and ran off towards a summer of fun.