Saturday night served as the storybook ending that Wellesley senior captain Caitlin Chicoski and her class had envisioned when they came in as freshmen back in 2014. A season that saw Wellesley defeat Needham for the first time in seven years capped off with a magical run to their first Division I state championship in program history following a thrilling 7-5 victory over Bay State Conference rival Walpole at Nickerson Field.

Meanwhile, it was a bitter case of déjà vu for the Rebels (22-1). After losing to Cohasset in last year’s Division II championship, the Lady-Rebs moved up to Division I in 2018 and proved that they belonged with a dominant 18-0 regular season and the outright Bay State Conference title. Unfortunately, the perfect season and the ability to go out on top for Walpole’s group of seniors was not to meant to be, as the Rebels fell in the state finals for the second year in a row. 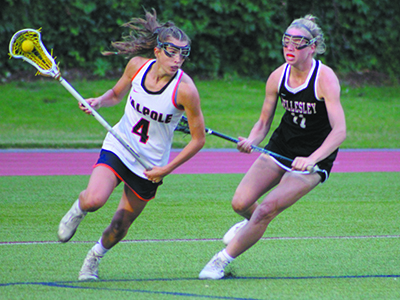 “A lot is running through my head right now,” said the Stanford-bound Chicoski following the victory. “We had just worked so hard all season for this moment. Ever since I was a little kid, I dreamed of winning a state championship, and having it happen during my last high school game is a dream come true. Not many people get to say that they ended their high school career on a win, and I’m just so blessed to be on a team like this. We’re such a family and we really earned it together.”

Despite Walpole and Wellesley entering Saturday’s championship match as two of the top offensive powerhouses in the state, it was goaltending and defense that stole the show. The game remained scoreless until 8:10 to play in the first half, when Grace Ahonen fired home a shot up high after a strong dodge and drive to the crease, drawing first blood for Wellesley.

Senior captain Emily Curtis responded for Walpole, thanks to a feed from junior Nicole Griffin with 2:58 to play, to even the game at one. However, back-to-back goals by Chicoski, 50 seconds apart, gave Wellesley a 3-1 lead with 42.5 seconds to play. In the final 15 seconds, Wellesley goaltender Anna Heru made a huge save on Walpole’s Celia Walsh off of a free position to preserve the two-goal lead for Wellesley at the half. 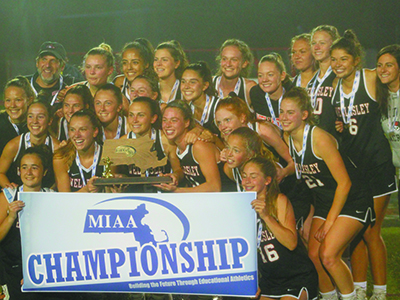 “She came up so huge this entire season and especially in this game,” said Chicoski about her goaltender, Anna Heru. “She steps up when we need her the most, always. She is so reliable. We owe so much to her. This state championship, it goes to the whole team, but she just did an amazing job.”

Following the break, each side began to get into a rhythm on offense. Bridget Noonan extended Wellesley’s lead to 4-1 just 1:14 into the second half. Curtis cut the deficit back to a pair for Walpole with her second of the game to make it 4-2 with 20:09 remaining.

Junior Maddy Balter fired home a laser of a shot upstairs just 20 seconds later, however, as the Raiders took a 5-2 lead with 19:49 to play. Alexis Rodia found Mia Drummey open at the edge of the crease and the senior co-captain deposited home a shot, off-stick side, to make it a two-goal game with 12:24 to play. Ahonen’s second of the game off of a feed from Brooke Baker gave Wellesley a three-goal cushion with 10:04 remaining, but back-to-back goals by sophomore Sydney Scales just 31 seconds apart cut the deficit to a single goal for Walpole with 7:01 to play.

Still down a goal with under two minutes remaining, Walpole pulled their goaltender and doubled the ball carrier in attempts to force a turnover and win back possession for a chance to tie it. With 54.7 seconds remaining, Balter was awarded a free position, and the junior Northwestern commit delivered the biggest goal of her career by firing the ball home into the empty net to give Wellesley a two-goal lead, clinching the state championship for the Raiders.