This season’s Wellesley High School gymnastics team put together the program’s strongest record in the past four years, finishing the season with a record of 6-2.

The highest score of the regular season came on January 24 against Needham. Wellesley finished the meet with a 135.7 over Needham’s 131.9.

The team was led by senior co-captain Emma Petrovich and sophomore Celia Sanabria, who participated in the all-around in 100 percent of the meets. Heading into the Bay State Conference championships, Wellesley was ranked third behind Newton North and Framingham. 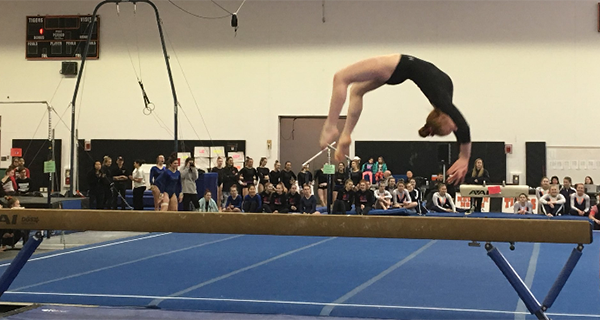 Celia Sanabria on the balance beam

Emma Petrovich was the number one all-star on balance beam with an average score of 8.9.

“I am so proud of how the team has come together this season,” said Petrovich. “Although we were one of the smallest teams in the league, we have defiantly shown that hard work and dedication, not the size of the team, determines its success. I am going to miss the sport and the people so much next year, but couldn’t have asked for a better way to finish the season and my last year on the team.”

“It has been so rewarding to have been a part of this team for the past four years,” added Gabby Reed. “The team has always worked so hard, which helped lead us to our victories. I am so proud of how much we thrived this season. It’s going to be so hard leaving the team and the sport for college.”