The 2017 season was one filled with immense success for the Walpole High girls lacrosse team, as the Lady-Rebels put together an 18-2 regular season to secure the No. 1 overall seed in Division II East before defeating Medway, Medfield, and Foxboro en route to the sectional title.

In the state semifinals, the Lady-Rebs took down Central/West champ Groton-Dunstable, 9-5, before falling, 14-6, to Cohasset in the state championship game.

Despite losing a deeply talented group of seniors from last season, highlighted by Bay State MVP and now-Northeastern Husky Mel Weber, the Walpole girls return an incredible amount of talent and a number of impact players in 2018 that will, hopefully, lead to another successful season and deep playoff run. However, the road to Nickerson Field will be a bit more difficult for Walpole in 2018, as the Lady-Rebels have been bumped up from Division II to Division I.

Leading the charge into battle this season for the Rebels will be four senior captains in Elizabeth Foley, Emily Curtis, Mia Drummey, and Celia Walsh.

“General expectations for this season would obviously be to make it back to the state championship game for the third time,” said Walsh when asked about what she and her teammates hope to accomplish this season. “This is going to be a difficult goal for us to accomplish, because we’ve been moved up to Division I and will be facing some challenging teams. Regardless of that fact, we hope to win as many games as possible and will be working towards winning our league through hard work and dedication.”

Along with Walsh, the Rebels return several impact players to look out for on offense, including fellow co-captain Emily Curtis.

“Audra Tosone and Emily Curtis are two returning starters and seniors that are definitely players to look out for this upcoming season from an offensive perspective,” said a humbled Walsh. “Syd Scales, Abby McLaughlin, and Nikki Griffin are also going to be key players in our offense this season; they are great players with some really awesome stick skills.”

On the defensive side, Walsh says to watch out for a trio of seniors, including two of Walpole’s captains.

“Libby [Elizabeth] Foley, Mia Drummey, and Erin Maloney are some players that will have an impact along with the rest of our defensive corps,” said Walsh.

As far as filling holes left behind by last season’s departures, Walsh says that she and her teammates are excited to see what this competitive group of underclassmen is capable of accomplishing.

“As a whole, we definitely have a great group of underclassmen as well that are all very competitive,” said Walsh. “Both grades [freshmen and sophomores] have proven to be quite relentless in the past couple days of preseason. There’s definitely spaces for them to fill left behind by last year’s graduating class, and to be honest, there’s a lot of promise in many of the players in both classes, so it will be very exciting to see who has the opportunity to fill positions.”

The Lady-Rebs will begin their quest back to the state tournament at home against King Phillip on April 2 before opening up non-conference play at reigning Division I champ Needham on April 5. 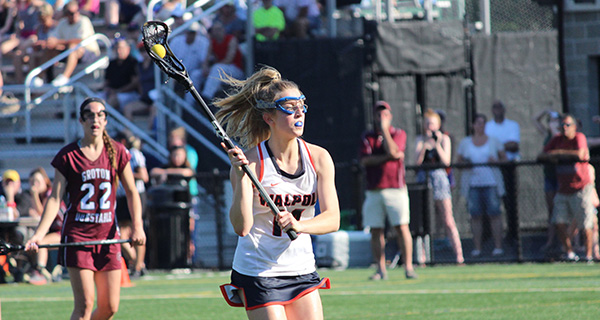 Senior captain and Villanova-bound midfielder Emily Curtis (14) will play a pivotal role in Walpole High’s offense this season before taking her talents to Philly in the fall.