Following a dominant 18-2 regular season, the Walpole High girls varsity lacrosse team won the South Sectional title this past week via wins over Medway (10-6) in the quarterfinals, Medfield (18-8) in the semifinals, and Foxboro (12-10) in the South Final. On Monday, the lady-Rebels (22-2) traveled to Babson College to take on Central/West Sectional champ, Groton-Dunstable (17-5) in the state semifinals.

Behind a hat trick by junior attack-man Emily Curtis (four goals), the lady-Rebels prevailed by a final of 9-5 to advance to Saturday’s Massachusetts Division II state title game at Nickerson Field (Boston University).

Walpole got the offense going early, as Northeastern-bound Mel Weber fired home a goal on a free position restart to seize the early 1-0 lead for the Rebs less than two minutes in. Groton-Dunstable responded with a goal less than a minute later to even the game at one. The Rebels immediately countered the G-D goal with a pair of tallies via junior Mia Drummey on a free position and junior Celia Walsh on a strong drive and finish from behind the cage, giving Walpole a two-goal edge at 3-1 with 12:49 to play in the half. 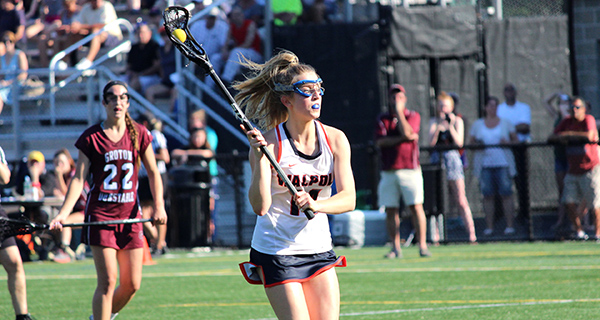 Junior Emily Curtis (14) rushes in and gets ready to deposit the third of her three goals on the afternoon against Groton-Dunstable late in the first half. Photos by Michael Flanagan

Groton-Dunstable cut it back to 3-2 with 9:52 to play, but the Rebels used their speed and conditioning advantage to seize control of the remaining portion of the half, and it resulted in two goals by Emily Curtis less than two minutes apart from one another. Thanks to Curtis’ efforts late in the half, the Rebels entered the break ahead by three at 5-2.

Curtis continued her strong offensive performance less than four minutes into the second half, receiving a pass from Alison Foley behind the cage and dumping the ball over the G-D goaltender’s shoulder to extend Walpole’s lead to 6-2 and give herself the hat trick. Just 24 seconds later off the ensuing face-off, Alison Foley rushed in and fired a bounce shot through the legs of the Groton-Dunstable goaltender to extend Walpole’s lead to five at 7-2 with 21:01 remaining in the half.

Groton-Dunstable responded to the Foley goal with two goals in 34 seconds, cutting it back to a 7-4 game with 18:05 to play. Just over a minute later with 17:13 remaining, Alison Foley fired home her second of the game on a free position restart to bump Walpole’s lead back to four at 8-4. GD cut it back to three with 14:38 to play, but freshman Sydney Scales stuck the dagger in the heart of Groton-Dunstable with a goal on a fast break with 7:06 to play, pushing the Rebel lead back to four at 9-5. After killing off a penalty with three minutes remaining, the Rebels attained possession and were able to run out the clock in the opposing end of the field, winning by a final of 9-5 and advancing to Saturday’s title game at BU.