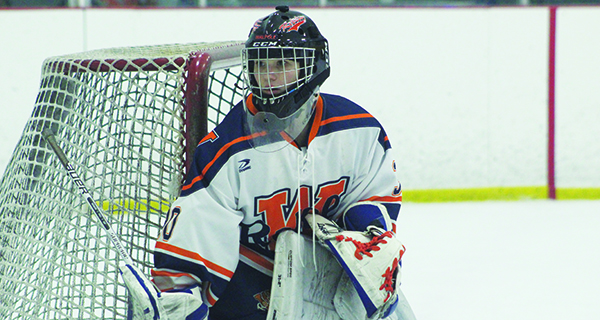 Senior goalie Kiera McInerney (pictured) hugs the post and keeps an eye on the puck down in the corner.

NDA was awarded a power play with a little over three minutes to play in the period, but Walpole was able to kill off the penalty and then some. With 2:32 remaining, a strong fore-check by senior captain and forward Meghan Hamilton led to a turnover just inside the NDA blue line. Hamilton took the puck and fed it down low to sophomore forward Emily Desimone who broke in on a mini-breakway and fired a shot up high for a shorthanded tally to double the Walpole lead to 2-0.

McInerney stole the show in the second period for Walpole, stonewalling a pair of grade-A scoring opportunities by NDA, including a sprawling left pad save on a breakaway bid with a little under six minutes to play in the frame. Walpole’s penalty kill unit thwarted a pair of NDA power play opportunities just before the end of the period, and the Lady-Rebs took their two-goal lead into the third. 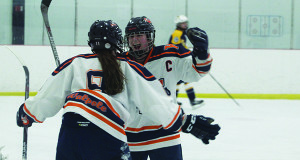 Notre Dame finally got one through McInerney to cut the deficit to 2-1 early in the third period. Walpole’s penalty kill did its job two more times throughout the third period to preserve the lead, followed by a game-sealing goal by freshman forward Livia Brooks to give Walpole the 3-1 victory.

The Lady-Rebs will return to action on January 19 at Rodman Arena against Milton.