Lady-Rebs headed back to sectional final

The 2018 season has been a storybook one for Walpole High School girls varsity lacrosse. An 18-0 regular season and a Bay State Conference title earned the Lady-Rebs the No. 1 overall seed in Division I East, and following last season’s loss to Cohasset in the Division II state championship game, there’s only one goal in mind for this postseason.

This past week, the Lady-Rebels earned victories over rival Natick (13-6) on Thursday in the quarterfinals and against perennial power Lincoln-Sudbury (14-10) on Monday to earn a trip back to the sectional title game. It may be their first year in Division I, but you’d never know it with the way the Lady-Rebels are rolling right now. 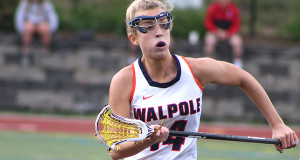 Senior captain and Villanova-bound attacker Emily Curtis (14) hustles back on the ride and defends a Natick clearing attempt.

Emily Curtis got the Rebels on the board just 50 seconds in against Natick on a restart before the senior captain and Villanova commit dished a feed to fellow senior captain Mia Drummey at the crease, who fired it home to push the lead to 2-0 with 23:30 to play in the half. Junior midfielder and faceoff specialist Audra Tosone then made it a 3-0 game off of a feed from Drummey during transition before sophomore midfielder Sydney Scales pushed the lead to 4-0 with a cut to the crease and low bouncer with 18:12 remaining. 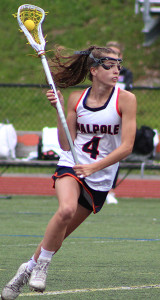 Audra Tosone (4) moves the ball across midfield during a clear attempt.

Following the break, it was all Walpole. Tosone completed the hat-trick to put the Rebels up a pair at 6-4 before Scales netted her second to make it 7-4 with just under 21 minutes to play. Senior captain and Georgetown commit Celia Walsh pushed Walpole’s lead to 8-4 with a goal off of a fast break with 16:22 to play before Curtis launched one home on a restart to make it 9-4. Scales completed the hat-trick to put the Rebels in double figures before Tosone’s fourth of the day made it a seven-goal game at 11-4.

When it was all said and done, Walpole put together an 8-0 run to push their lead to 13-4 and salt the game away. They prevailed by the seven-goal final.

On Monday, Emily Curtis and Audra Tosone each netted a hat-trick as the Lady-Rebels ground out a 14-10 win against Lincoln-Sudbury to advance to the sectional finals against Concord-Carlisle on June 14.