Despite some clutch efforts late to tie the contest, Natick came away with the 2-1 season-opening victory, thanks to a goal off of a corner kick during stoppage time.

Senior Will Popper got the start in net for the Rockets and kept the game scoreless in the early going, thanks to a big save off of a cross, followed by another sprawling save off of the ensuing rebound. 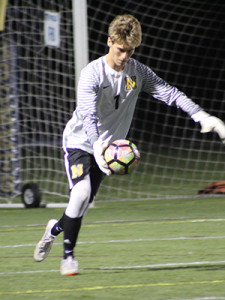 Senior keeper Will Popper (pictured) boots the ball up the field late in the first half.

With 7:06 to play in the first half, Joey Colasacco fed a pass up the field to create a breakaway for Nick Goudsmit, who sprinted in and performed a beautiful little chip shot high over the head of Popper and into the back of the net to give the Redhawks a 1-0 lead.

Sophomore midfielder Gerard Costa nearly tied the game at one when the Swiss newcomer headed a ball just above the crossbar off of a corner.

The game remained 1-0 in favor of Natick at the half.

Needham began the second half pressing vigorously in an attempt to generate more offense and tie the game. Natick went into conservative mode and packed their box with bodies to prevent crosses. After nearly an entire half of failed scoring opportunities, Needham finally broke through with 5:07 to play, thanks to junior midfielder Matt Dougherty. After taking a pristine pass from senior captain and defender Christian Rufo, Dougherty flew in and deposited the ball into the right side of the net to even the game at one.

It appeared as if Needham was going to escape with the 1-1 tie, but it was not meant to be.

During stoppage time, Natick headed home a corner kick to stun the Rockets on their home field and pull off the 2-1 victory.

On September 7, Needham was able to pick up its first victory of the season, 4-2 at Walpole. It’ll be a quick turn-around for the Rockets this week, as Needham will travel to Natick today, September 13, and attempt to avenge their season-opening defeat.