The Needham High School varsity football team continued to roll on Friday night, defeating Weymouth, 42-6, on Senior Night at Memorial Field to move to 4-0 on the season. 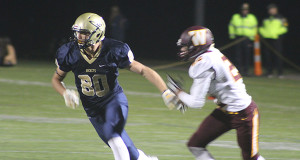 The Rockets got off to the perfect start, recovering a fumble inside the Weymouth 10-yard-line on the first play from scrimmage. Tyler Reid punched in a nine-yard touchdown run on the first play of the ensuing possession and the Rockets seized a 7-0 lead just 40 seconds in.

Needham’s defense forced a turnover on downs at their own 40-yard-line on Weymouth’s ensuing possession to take back control of the football. The Rocket offense again made quick work of the Weymouth defense on their ensuing series - this time it was Odahri Hibberts who caught a ball from Charlie Ogletree on a drag route and scampered 59 yards down the far sideline to make it a 14-0 game with 8:00 to play in the quarter. 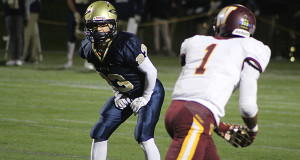 Linebacker Jason Child (23) keys in on his opposition early in the second quarter.

After forcing the Wildcats to a three-and-out, Needham struck again as a long punt return by Hibberts set up the Rocket offense deep in Weymouth territory before Reid dashed 39 yards to the end zone on the second play of the drive to make it a 21-0 game with 5:00 to play.

Needham’s defense again stood tall on Weymouth’s next series, forcing a Wildcat punt. Duke-committed tight end Matt Smith capped off Needham’s next possession with a 39-yard touchdown reception with five seconds to play in the opening quarter, as the Rockets went ahead 28-0. The second touchdown of the night by Hibberts with 45 seconds to play in the half on a 30-yard catch-and-run gave Needham a 35-0 lead at the half. 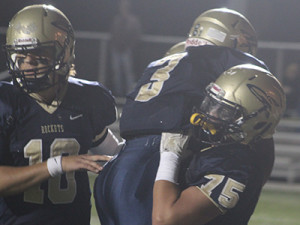 Jack Murmes kept things rolling for Needham to begin the second half, catching a ball on a slant route and running 41 yards down to the Weymouth five-yard-line. Angelo Davos capped off the drive with a five-yard touchdown run to make it a 42-0 lead, hammering the nail well into the coffin as the Rockets emerged with a 42-6 victory.

Playoff spots will be on the line when Needham hosts Braintree for a pivotal mid-season clash on October 5 in a game that could well decide the conference title.