Two consecutive losses to conference opponents was not the ideal way for the Needham High School football team to end the regular season.

“Definitely tough,” said senior tight end Jack Murmes following Needham’s 51-26 defeat to Walpole in their regular season finale. “We will learn from this, respond, and be ready for playoffs. Minor setback for a major comeback.”

Nevertheless, despite the consecutive losses, the 5-2 Rockets were still awarded the No. 2 overall seed in Division I South and were awarded a home playoff game against Newton North on Friday at Memorial Field.

The Rockets defeated the Tigers (3-4) by a 38-7 final earlier in the season, but Friday night was a different story as defensive play dominated the storylines. Following a scoreless first quarter that saw each team exchange punts, Needham finally drew first blood when Odahri Hibberts capped off an 11-play, 85-yard drive with a five-yard touchdown run with a nifty little cut-back move to give the Rockets a 7-0 lead at halftime. 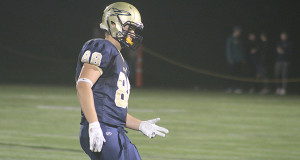 Senior tight end Jack Murmes (88) gets set at the line.

Needham missed a field goal on their first possession of the second half, but the defense, led by Jason Child and Niall Dolan with two sacks each, forced a three-and-out to get the ball back for the Rocket offense. The Rockets then doubled their lead to 14-0 on the ensuing possession thanks to the legs of Tyler Reid (34 carries, 134 yards, one touchdown), who busted a 25-yard run down inside the North 10-yard line before capping off the drive with a six-yard touchdown run with 10 seconds to play in the quarter.

Newton North cut the deficit to 14-7 with 7:09 to play when Kyle Ray-Canada reeled in a 35-yard touchdown reception from Andrew Landry. The Rockets turned the ball over on downs at the North 35 with 3:58 to play on their next series. However, the Needham defense against stood tall and forced a turnover thanks to back-to-back sacks by Child and Dolan, the second of which was a strip sack recovered by Jonah Kurker.

The Rockets were able to kill the clock all the way down to eight seconds remaining before turning it over on downs. Newton North’s lateral attempt went to no avail and Needham came away with the 14-7 victory. In all, Needham’s defense accounted for seven sacks on the night.

Needham will take on Catholic Conference power Catholic Memorial on November 2 at 7 p.m. at Memorial Field in the South semifinals.