Needham Post 14 and Westwood Post 320 met for the third and final time this season on Saturday afternoon. Unlike the first two times these District Six rivals squared off earlier this summer - the teams split a pair of 1-0 games in late June and early July - Saturday’s contest saw offensive explosions from both sides.

Westwood drew first blood in the top of the first inning, thanks to sacrifice fly by Demitrious Tsoumbanos, but the 1-0 lead would not stand for long. Will Foley reached on an error at third with one out in the bottom of the first. Matt Connelly drew a walk with two outs, followed by Drew Dorsey reaching on a hit-by-pitch and Kevin MacKenzie drawing a walk with the bases loaded to force home a run, tying the game at one. Danny DeMayo drew a second consecutive walk to force home the go-ahead, run followed by a two-RBI single to center by Joe Fiore to give Post 14 a 4-1 lead after one inning.

Andrew Ko worked a 1-2-3 top of the second inning for Post 14 with a pair of strikeouts and a line-out to short. Kevin MacKenzie reached on a single with one out in the bottom of the second, but Westwood starter Seamus Kilgarriff worked his way out of trouble with a fly to right and a groundout to third.

Tom Krumseik drew a walk to lead off the top of the third. Following a pair of fly outs, Tsoumbanos drew a walk to put men at first and second. Ko then struck out Pat Tevenan looking to end the inning and get out of the jam. With the bases loaded in the bottom of the third, Hunter Anderson wore a pitch on the shoe to force home a run and allow Needham to extend its lead to 5-1. 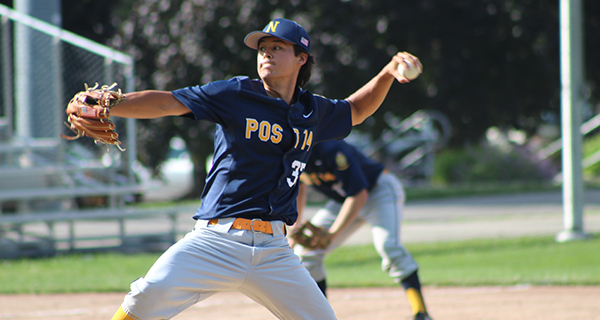 Andrew Ko (37) fires home a pitch in the top of the second. Photos by Mike Flanagan.

Westwood’s bats came alive in the top of the fourth, plating five runs - all of them coming with two outs - to take a 6-5 lead. Jack Rufo and Derik Nelson got it started by drawing a pair of walks. Consecutive hit batters in Krumseik and James Bean forced home a run, cutting the deficit to 5-2 and loading the bases for Sean Birch. On a 1-2 count, Birch connected and drove a double down the right field line to plate a pair and cut the deficit to 5-4. With runners at second and third and Ko chased from the game, Needham brought in Kevin MacKenzie in relief. Tsoumbanos and Tevenan then drew consecutive walks, forcing the tying run home. A passed ball to the backstop allowed Birch to take home with the go-ahead run and give Westwood the 6-5 lead.

Needham responded accordingly in the bottom half of the fourth. Bryce Anderson and Matt Connelly led off the inning with consecutive singles before MacKenzie doubled a ball into the left-centerfield gap to plate Anderson and tie the game at six. Andrew Kelly came on in relief for Westwood, but a fielder’s choice on a grounder to second allowed Connelly to run home with the go-ahead run for Needham. An error on a Ko pop-up to second with two outs brought in MacKenzie to make it a two-run game at 8-6 after four innings.

Westwood strung together another rally in the top of the fifth. An RBI single by Krumseik made it a one-run game at 8-7 before consecutive walks by James Bean and Sean Birch loaded the bases for Tsoumbanos. Tsoumbanos cracked a double into the right-centerfield gap to clear the bases and give Westwood a 10-8 lead, but was thrown out trying to stretch it into a triple to end the inning.

Hunter Anderson tripled to lead off the home half of the fifth and came around to score on an overthrow at third and the ball rolling out of play, cutting the deficit to 10-9. Will Foley singled to center to put a man on for Connelly, who launched one out of Memorial Field and almost into the parking lot to give Post 14 back the lead at 11-10. Needham loaded the bases following a walk by Dorsey and a pair of singles by Fiore and MacKenzie, but Sean Birch came on in relief and struck out Ko to end the inning and limit the damage to three runs.

A scoreless sixth inning allowed Will Foley the chance to close the door in the top of the seventh for Needham. With runners at second and third with no outs following a walk and an infield hit to start the inning, Foley induced a fielder’s choice at second to put runners on the corners with one away. Sean Birch then reached on an infield hit to load the bases. Foley struck out Kevin McDonald looking on a 3-2 curveball, followed by a line-out to right by Dan DeLorey. Westwood left them loaded and Needham prevailed, 11-10, winning the season series two games to one.