Every town tries its best to put on the best Veterans Day it can to pay homage to those who sacrificed their time - and lives - to keep their country safe. Walpole is no different; its common was a bustling hub on November 11.

Refurbished military vehicles, including a World War II Jeep, parked on the green. A tan Humvee sat next to it. Older veterans had put on their old uniforms just for this celebration. “Sucking it in, are you?” joked one veteran to another. As veterans grabbed seats near the gazebo, others grabbed hot coffee and various treats before the ceremony started. 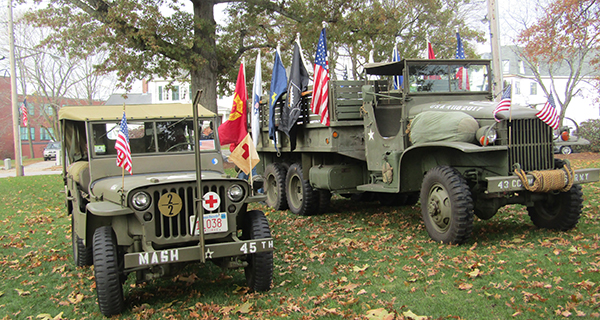 A couple of the refurbished military vehicles that were at the ceremony. Photos by Amelia Tarallo

David Ferrara, a member of the Veterans Committee, recalled how he was recently contacted by a fellow Marine. After sharing a touching story about their friendship, Ferrara reminded his fellow veterans of the importance of checking in with their fellow service members. “In the life of a Marine are brothers cut from the same cloth,” he noted. Some members of the crowd nodded their heads in agreement, knowing the relationship Ferrara described. Ferrara summed up the relationship amongst veterans and current service members with one word: camaraderie.

“It’s the best part of being a veteran,” he noted.

Guest speaker and Marine Corp veteran Angelo Rivera Palacio presented a speech about the sacrifices that veterans have made in exchange for American freedom. Included in his poetic speech was that it is imperative that the vets are supported when they come home. “Remember and know that freedom has a price,” he said. He ended his speech by reminding everyone that “democracy is earned, not given.” Members of the crowd wiped tears from their eyes following the speech.

As is tradition, Henry Scanzion and a fellow veteran read the names of veterans who had passed away, along with when they had served. It was topped off with “Taps” and a firing detail behind the crowd.

At the end of the ceremony, some of the crowd ventured over to VFW Post 5188 for some refreshments. Others left, some returning to their jobs for the day or home to enjoy the rest of the holiday. No matter where they went, everyone left knowing the important sacrifice veterans have made for their country.