The Wellesley and Needham High football teams renewed their historical rivalry with one another on Thursday morning in their annual Thanksgiving grudge match at Memorial Field in Needham. Running back Grant Chryssicas led the way for Wellesley with four touchdowns, as the Raiders (11-1) pulled out the 34-14 victory to end their season on a positive note. 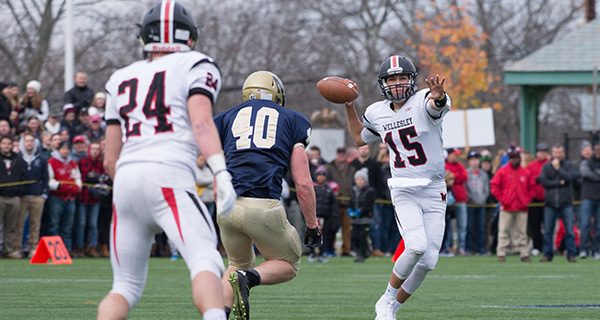 Wellesley quarterback Jack Tishman (15) scrambles and looks downfield on a dump off to wideout Scott Westerman (24).
Photos by Alison Borrelli

Following a 43-yard return by Needham’s John Andre on the game’s opening kick, Wellesley’s defense stood strong and forced a three-and-out on the opening possession for the Rockets (5-6).

Quarterback Jack Tishman then led the Raiders down the field on their opening possession, capped off with a touchdown run by Chryssicas to put Wellesley up 7-0. 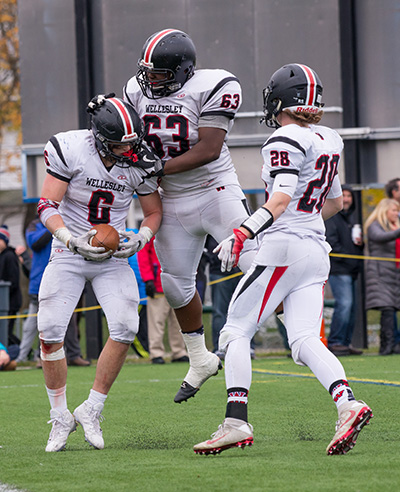 After Wellesley forced another Rocket punt and Needham stood strong in the red zone and forced a Tishman interception, the Raiders and Rockets entered the second quarter with Wellesley still ahead 7-0. A long clock-killing drive by the Raiders to begin the second quarter was capped off by Grant Chryssicas adding his second score of the game with 8:44 left in the half to put Wellesley up 13-0 (PAT unsuccessful).

Quarterback Charlie Sumner got the Rockets on the board on Needham’s ensuing possession when he hooked up with wideout Brendan Smith for a 24-yard touchdown to cut the deficit to 13-7 with under five minutes to play in the half.
The Raiders continued to thrive offensively, however, as Wellesley added two quick scores from Maiona and Chryssicas just before the half to go up 27-7 at the break.

Wellesley marched down the field on their second possession of the second half, as the senior running back and captain Chryssicas added his fourth score of the game to put the Raiders ahead comfortably at 34-7 with under two minutes to play in the third quarter.

Needham cut the deficit to 34-14 on their opening possession of the fourth quarter when running back Jared Sklar punched one in from three yards out, but the deficit was too much to overcome for the Rockets, as the Raiders held on for the 34-14 victory and pushed their all time record against Needham to 61-59-9.