The title comes four days after the Porkers took down King Phillip Regional 2-0 on Wednesday evening at Turco Field to advance to Saturday’s Sectional Final. 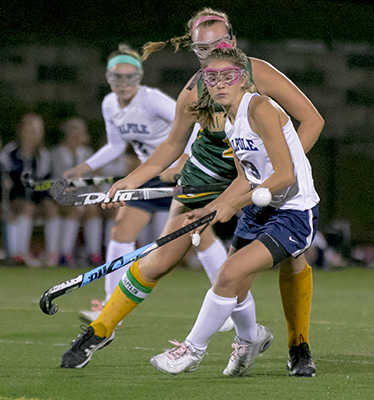 Audra Tosone (3) tracks down a loose ball and outmuscles a KP defender early in the second half.

During their semifinal win over KP, the Porkers controlled the tempo of the game from the start, holding possession in Warrior territory for the majority of the first half. However, despite the offensive pressure by Walpole, the game entered halftime still scoreless.

The Porkers tightened up defensively and thwarted the Warriors from any serious scoring opportunities throughout the beginning of the second half, and their stellar defensive efforts rewarded them with more time of possession in the opposing end of the field.

Walpole drew first blood with 21 minutes remaining in the second half when senior captain Mel Weber shot home the rebound on a penalty corner attempt by Abby O’Sullivan to put the Porkers up 1-0. Weber signed a National Letter of intent to play at Northeastern University earlier in the day on Wednesday. 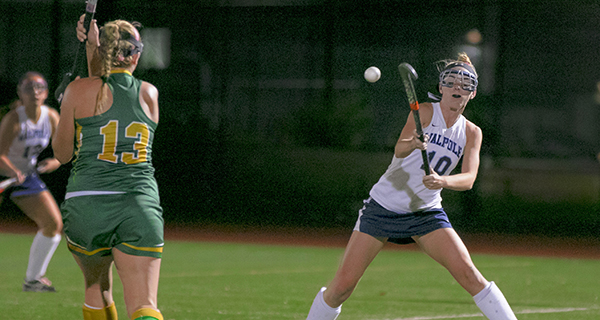 Emma Flynn (10) goes to knock down an aerial pass attempt by a KP attacker.

Just minutes after the Weber goal, the Porkers struck again with 16 minutes to play when Emma Flynn broke towards the net and fired a shot that was kicked away by the KP goalkeeper. Flynn followed her shot to the net, however, outmuscled a KP defender, dove and tapped home the rebound past the sprawling KP goalie to give Walpole the 2-0 lead.

Walpole continued their dominant defensive play throughout the remainder of the second half, holding KP off the scoreboard by locking down the middle of the field and keeping the ball away from their net. Goaltender Audrey Lynch (four saves) preserved the shutout win with two kick saves off of KP corner attempts late in the game.

Following the win over KP in the semifinals, the Porkers entered Saturday’s tilt with fourth-seeded Sandwich (17-2-2) determined to bring home another sectional championship for their historically elite program.

The Porkers and the Blue Knights both came out of halftime firing on all cylinders, with both teams trading offensive chances but neither being able to put one in the back of the net.

With 7:18 left to play in regulation, Audra Tosone gave the Porkers the lead with a goal and Walpole was just over seven minutes away from a sectional crown. Following the go-ahead goal by Tosone, the Porkers locked down their end of the field by putting bodies in front of their cage, severely limiting any type of possible scoring opportunity for Sandwich.

The Porkers were able to fend off a late push by the Blue Knights in the final minutes and preserved the 2-1 victory, clinching the South Sectional crown and advancing to the MIAA State semifinals against the winner of the North Sectional (Acton-Boxboro vs. Winchester).