It was a quick start for the Walpole High School field hockey team on Thursday night against Bay State Conference rival Braintree, as the Porkers (6-0, 5-0) continued their unbeaten streak to begin the season with a convincing 7-0 victory. 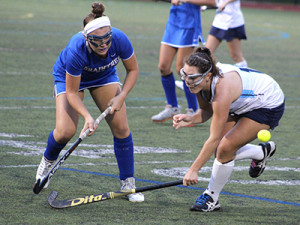 Brooke Skulski (pictured) goes down and blocks a pass early in the first half.

Audra Tosone (three goals) got the Porkers on the board with a little over 16 minutes to play in the first half, thanks to a long flip from about 12 yards out to draw first blood. Less than a minute later, senior Nikki Griffin doubled the lead to 2-0 by slamming home a rebound off of transition.

Tosone made it 3-0 with her second of the night with another long flip into the back of the cage with 6:27 remaining before junior Sydney Scales smacked home a rebound to make it 4-0 with 4:12 to play. Sophomore Molly Whelan scored on a fast break just 1:12 later to make it a 5-0 game with three minutes to play and the Porkers took their five-goal edge into the half.

Following the break, the Porkers kept their foot on the gas as Scales put home another rebound goal for her second of the night to make it 6-0 with 27 minutes left. Tosone completed the hat trick just moments later to put Walpole ahead by a touchdown. The Porkers continued to play shutdown defense and went into clock-kill mode.

Walpole will look to stay unbeaten with upcoming games against Brookline on September 27 and at Milton on October 2.