Raiders and Porkers fight to draw

The defending Division I state champion Walpole Porkers (7-0-2) traveled to rival Wellesley (8-0-2) on Tuesday afternoon for a battle between not only two of the top teams in the Bay State Conference, but all of Massachusetts, as both entered the game ranked in the top-five of the latest Boston Globe high school field hockey rankings.

Back on September 5, the Porkers and Raiders opened their respective seasons at Turco Field, but neither were able to find the back of the net thanks to mutual shutdown defensive play. The game ended in a 0-0 draw. 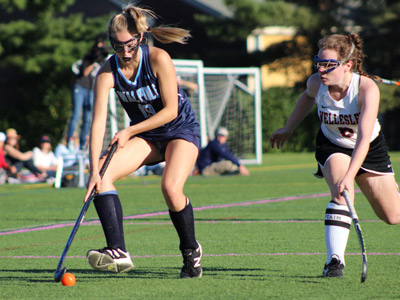 Wellesley’s Alex Ramsden (8) defends against Walpole’s Nicole Griffin (19) early in the second half.

“It’s similar to a state tournament game. It always is against them,” said Wellesley head coach Erin Stickle when describing the duels the Raiders tend to have against Walpole. “It’s exciting to play Walpole, they are annually one of the best teams in the state and you have to focus on never giving up.”

On Tuesday, the Raiders and Porkers played another game in which both sides were extremely stout defensively. However, unlike their first meeting on September 5, both sides were able to put a ball in the back of the net. With 22:36 remaining in the first half, Brooke Hamilton tipped home a shot on a corner attempt to give the Raiders a 1-0 lead. A little under 10 minutes later, however, Walpole responded via the stick of Celia Walsh, who slapped home the rebound of an Alex Rodia shot to knot the score back up at one, and the game entered the half tied.