After an up-and-down 9-9-3 regular season, the Walpole High girls varsity hockey team earned the No. 15 seed in the 2018 Division II state tournament. Following a 5-2 victory over No. 18 Matignon in the preliminary round, the Lady-Rebs fell to eventual state runner-up Canton, 4-1.

Despite last season’s tough finish, the Walpole girls return to the ice in 2018-2019 confident and ready to compete for a Bay State Conference title. According to senior goaltender Kiera McInerny, the Lady-Rebs are also hopeful that they can do some damage later on this winter in the state tournament.

“We want to win,” said McInerny when asked on her team’s general expectations for the season. “We didn’t lose many players to graduation, so we hope to go very far into the playoffs.”

Leading Walpole this season are four senior captains: center Meghan Hamilton, right wing Audra Tosone, left wing Olivia Malone, and defenseman Madison Ryan. As juniors in 2017-2018, Hamilton, Tosone, and Ryan were all named Bay State Conference All-Stars. With this trio back, along with Olivia Malone, Walpole is hoping that its elite group of upperclassmen will mesh well with a strong incoming freshman class and be able to compete for a state championship. 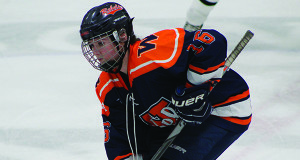 Pictured last season against Wellesley, senior captain Meghan Hamilton (16) will serve as a top-line center for Walpole High girls hockey this season and help guide the Lady-Rebels back to the state tournament.

“We have a strong freshman class coming in,” said McInerny. “We expect them, along with our returners, to help strengthen the team even more and help us reach our goals.”

The Lady-Rebels will begin their quest back to the state tournament on December 12 against King Phillip before a date with Newton (North and South) on December 15 to open up conference play.