Griffin, Porkers roll in round one

Last season’s Division I state champion Walpole Porkers (14-2-2) took to the field to defend their title on Saturday afternoon at home against North Attleboro in the first round of Division I South Sectional playoffs. In part thanks to a two-goal first-half by Nicole Griffin, the No. 3 seeded Porkers rolled to a 5-1 victory.

Despite the lopsided final score, it was not the smoothest of starts for the Porkers on Saturday, as North Attleboro controlled the bulk of the early possessions and struck first on the rebound of a penalty corner with 18:40 to play. 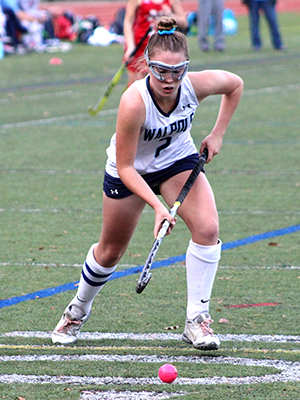 After stick handling through the legs of a North Attleboro defender, Celia Walsh (2) corrals the ball and dashes towards the cage for a scoring chance. Photos by Michael Flanagan

Following the opening strike by North Attleboro, Walpole called a timeout to make some adjustments and settle things down. When play resumed, the Porkers saw immediate results.

Less than two minutes after the North Attleboro goal, Nicole Griffin tapped home the rebound of a shot by Celia Walsh to tie the game with 16:41 remaining. Just 58 seconds later with 15:49 to play, Griffin received a pass from Walsh and cut to the cage before depositing the ball past the left pad of the North Attleboro goalkeeper to give Walpole their first lead of the game at 2-1.

With 7:31 to play, Walsh dangled through a group of Red Rocketeer defenders and fired a shot on net that was kicked away. However, Walsh followed her shot, scooped up the rebound, and whacked it home to extend the Porker lead to 3-1. 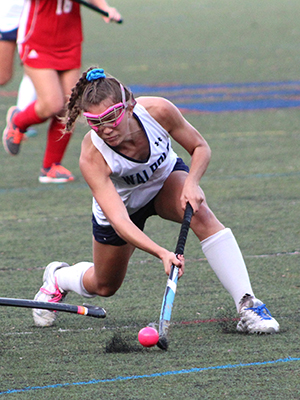 Audra Tosone (3) avoids a stick-check from a North Attleboro defender and unleashes a shot on net late in the first half. Photos by Michael Flanagan

With under a minute to play, Walpole was awarded a penalty corner. Caileen Quinn received a pass from Alex Rodia on the corner attempt, calmly took a step back, and lofted the ball high up and over the heads of the entire North Attleboro defense and their goalkeeper. The ball ended up in the back of the net to give Walpole a commanding 4-1 lead at the half.

The Porkers completely shut down the North Attleboro offensive attack in the second half, bringing some extra bodies back into their own end and clearing the ball out whenever the Red Rocketeers were able to carry across midfield. Walpole added a late insurance goal to go ahead by four and prevailed with the 5-1 victory to advance to the South quarterfinals.