Saturdays are for the Raiders

Lacrosse isn’t just a sport in Dover-Sherborn, it’s a lifestyle. Four of the last five seasons, the Division III Boys Lacrosse State Championship has resided at 9 Junction Street. This past Saturday, the Raiders took home yet another Division III Central/East Sectional crown and got themselves one step closer to the three-peat on the back of senior captain and North Carolina commit Bailey Laidman (five goals, three assists), defeating Littleton by a final of 18-7. After this reign of recent dominance in both the lacrosse sectionals and state finals, there is no doubt that Saturdays in June belong to the Raiders.

Junior attack-man Jack Dillon got the Raiders rolling early, netting two goals 31 seconds apart to give DS a 2-0 lead with 6:21 to play in the first (both assisted by Jack Mahoney). Bailey Laidman launched an absolute missile up high with 5:16 remaining from 12 yards out to extend the lead to three. Littleton cut the deficit to two at 3-1 with two minutes to play in the quarter, but the Raiders responded quickly, as Jack Mahoney took a pass from junior midfielder Michael Mastrobuono, drove to the cage and finished low to extend the lead back to three at 4-1 with 41 seconds to play in the quarter.

Littleton cut it back to 4-2 less than two minutes into the second frame, but rips by Laidman and Mahoney quickly gave DS a four-goal edge with 6:17 remaining in the half at 6-2. Littleton then went on a quick 2-0 run of their own to make it a two-goal game once again at 6-4, but Mahoney’s third of the game with 1:33 to play after a strong drive and finish low made it a three-goal lead for DS. Michael Mastrobuono extended the lead back to four at the half when he launched a right-handed strike off the pipe and in with 48 seconds to play. 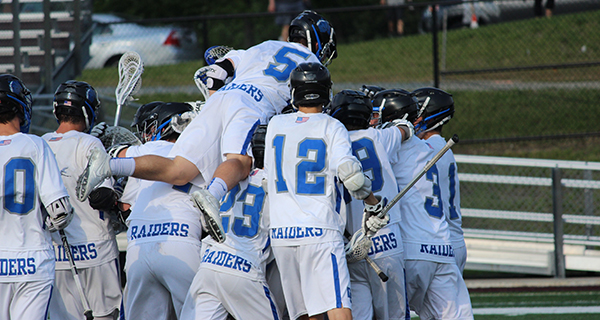 The Raiders mob goaltender Ross Barnard at the conclusion of Saturday’s victory. Photos by Michael Flanagan

Senior midfielder and face-off specialist Joe Paolatto extended the DS lead to five less than three minutes into the third quarter on the man-up after he was fed a pass by Laidman and finished with a strong drive and left-handed bounce shot. Littleton fought back to make it a 9-6 game with two straight goals on the man-up, but then unfortunately for the Tigers, Bailey Laidman happened, as the North Carolina commit fired home three straight goals to go along with one from Dillon (his third of the game) to give DS a commanding 13-6 lead. Littleton got one back in the final minute of the quarter, but the Raiders still entered the final frame of regulation with a commanding six-goal lead.

Any thought of a Littleton comeback was put to bed early on in the fourth, as a goal by Hunter Gregory followed by Jack Dillon’s fourth of the game pushed the lead to eight with 9:45 remaining in the fourth. The Raiders would add on three more fourth quarter tallies off the sticks of Gregory, Mahoney, and Mastrobuono, cruising to the 18-7 victory and winning their fifth Central/East Sectional title in as many seasons.

At the time of print, the Raiders will now look to defend their back-to-back state championships in the state semifinals on Tuesday evening, and also give the 2017 senior class (Laidman, Paolatto, goaltender Ross Barnard, etc) the chance to go out on top.