For the fifth consecutive season, the Dover-Sherborn Raiders are your Division III Central/East boys lacrosse champions after a resounding 14-9 victory over Medway on Saturday afternoon at Medfield High School in the sectional finals. The game featured an 11-goal barrage in the first half and saw five different Raiders score multiple goals on the day. 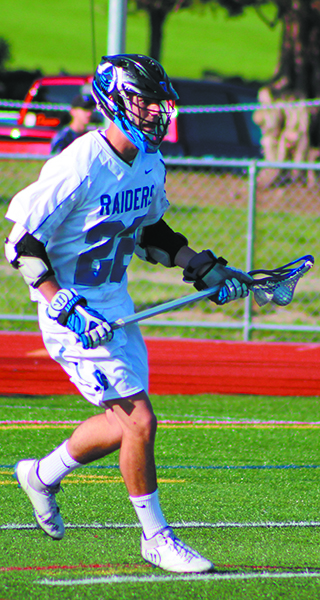 Pictured against Hopedale in the sectional semifinals, Jack Dillon (22) has played a massive role in DS boys lacrosse’s return to the Division III final four this spring after the senior captain netted four goals and dished out two assists in Saturday’s sectional final. Photos by Michael Flanagan

Senior captain and midfielder Michael Mastrobuono (three goals) netted a pair in the first four minutes before fellow senior captain Jack Dillon (four goals, two assists) capped off a drive from X with a finish down low to make it 3-0. Goals by freshman Pierce Gregory (two goals, four assists), Mastrobuono to complete the hat-trick, and Dillon pushed DS’s lead to 6-0 at the end of one.

Dillon completed his hat-trick in the opening minute of the second quarter to push the lead to 7-0. Medway got one back to make it 7-1, but Gregory immediately responded for the Raiders with his second of the game off of a feed from Dillon to make it 8-1 with 5:01 left in the second quarter.

Back-to-back goals by Timmy Polk (two goals) and Erik Niit (two goals, two assists) on an extended man-up put DS in double figures at 10-1 before another from Dillon gave DS an 11-1 lead at halftime.

Medway cut into the deficit to make it an 11-3 game, but Polk responded for DS to make it 12-3 with a left-handed rip off of transition. Medway was able to trim the deficit down to five late in the fourth quarter, but were never able to fully overcome the 11-1 hole they dug themselves. DS hung on for the 14-9 victory and added a sectional title ring for the thumb.

At the time of print, the DS boys will look to exact some revenge in the Division III state semifinals against Grafton, who knocked the Raiders out of last season’s tournament in overtime, on June 20 at Nashoba Regional.