The No. 2 Dover-Sherborn Raiders took care of business and advanced to their seventh straight Division III Central/East title game on Monday afternoon with a resounding 17-6 victory over No. 3 Hopedale. 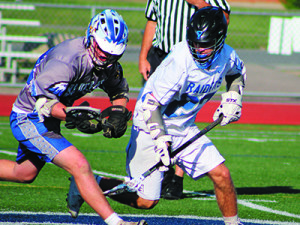 Junior fogo Matt Paolatto (23) does battle for a faceoff early in the third quarter. Photos by Michael Flanagan

The Raiders jumped out to a quick 2-0 lead thanks to a pair of dump-in goals at the crease by Dillon (2) before cranks by Mastrobuono and Niit pushed the lead to 4-0 with 2:22 to play in the opening quarter.

Hopedale got on the board with 41 seconds to play thanks to Jacob Wollensak, but the Raiders immediately responded with a 4-0 run to begin the second quarter as back-to-back goals by Mastrobuono, one from Niit and one from junior fogo Matt Paolatto increased DS’s lead to 8-1.

A quick 3-0 run by Hopedale with goals coming from Nick Fayad, Wollensak, and Ethan Warren cut the deficit to 8-4 for the Blue Raiders at the half. 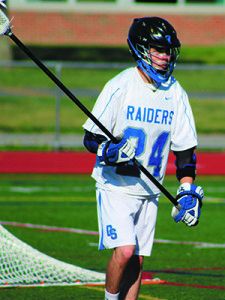 Senior close D Kyle McPherson (24) defends his cage on the man-down late in the third quarter. Photos by Michael Flanagan

Following the break and some adjustments, DS completely took over the game in the form of a dominant 8-0 run. Mastrobuono netted a pair with two right-handed bouncers on the run along with two from Dillon, one on the man-up and one off of transition, and one from Pierce Gregory.

Polk netted a hat trick in the second half, including a beautiful little dodge and low-to-high finish towards the end of the third quarter.

The scoring barrage was too much for Hopedale to overcome and the Raiders pulled away for the 17-6 victory.

“I thought we came out strong and then we let up a little bit in the second quarter,” said DS head coach Brian McLaughlin. “We came out in the third and played hard and picked up a lot of groundballs. They were a very athletic and well-coached team and they did some good things against us, so it was nice to get the win today.” 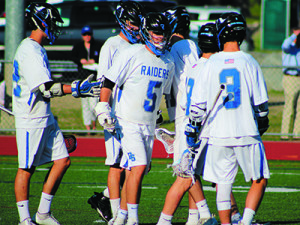 “Standish’s clearing has improved so much,” said McLaughlin. “He’s improving, listening, and just trying to get better every day.”

“They’ve been around for quite a while,” said McLaughlin about Mastrobuono and Dillon. “Two captains, two good leaders, and they’ve played in these games before and they know that you got to come to play in these playoff games.”

Dillon also credited his freshman goaltender following his 11-save performance.

“He has stepped up for us more than we expected this year,” said Dillon. “In eighth grade he was a middie and this is his first year playing goalie. He stepped up tremendously, we can’t be more surprised or happy with his performances every game.”

DS will play the winner of Tuesday night’s contest between No. 1 Littleton and No. 4 Medway in the sectional final on Friday.