Following a 2-1 victory over Sandwich in the MIAA D1 South Sectional finals last Saturday, the Walpole High field hockey team ground out a 1-0 victory over Acton-Boxboro in the state semifinals on Wednesday night with the game’s lone goal coming off the stick of Audra Tosone.

The win over AB advanced the Porkers on to Saturday’s state finals against Longmeadow at Worcester Polytechnic Institute, where the Porkers took home the state title with a thrilling 3-2 come-from-behind overtime victory.

Just over 17 minutes into the match, Audra Tosone fed a pass to Cecilia Walsh who fired a shot past the reach of the Longmeadow goalkeeper and into the back of the net to give Walpole the early 1-0 lead.

After falling behind, Longmeadow amped up their offensive pressure. It paid off with a tying goal with just over five minutes to play in the half. Less than a minute and a half later, Longmeadow struck again to take a 2-1 lead into halftime.

The Porkers came out of the break determined to knot the score at two and attacked the Lancer net with several incredible scoring chances. However, despite the numerous excellent chances to tie the game early in the half, the Porkers were continually denied by tight Longmeadow defensive play and stellar goaltending. 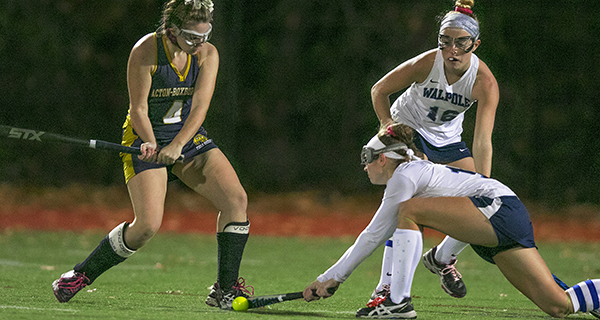 Senior captain Mel Weber (15) demonstrates her toughness and mindset to win at all costs by sacrificing her body and blocking a shot. Photos by Tim Hofman

With time winding down on the Porkers, Abby O’Sullivan stepped up and delivered the tying goal with 5:38 to play, and suddenly the Porkers seized all of the momentum.

Walpole almost struck again on two penalty corner attempts in the final minute of the second half, but both shots went wide and regulation ended with the Porkers and Lancers knotted at two, meaning that the state championship was going to come down to a sudden-death overtime.

With just under eight minutes to go in overtime, senior captain and Northeastern University commit Mel Weber broke towards the net and stick-handled through two Longmeadow defenders. Weber fed a pass to a wide-open Emma Flynn in front of the net, who fired home a shot on the left side of the net for the title-clinching goal.

Good teams find a way to win big games, and that is exactly what the Walpole Porkers did when it came down to crunch-time in their final three games against Sandwich, Acton-Boxboro and Longmeadow. Congrats to the Porkers on an incredible season and an even more incredible run to a state championship.