After a thrilling 2-1 comeback victory against rival BC High in round-one, the Xaverian Brothers High School varsity soccer team took to the pitch on a rain-soaked Hawk Bowl on Thursday night as the Hawks hosted New Bedford in the Division I South quarterfinals.

Behind a pair of goals by sophomore Wellesley native Finn Mungovan and a collective shutdown defensive effort, the No. 2 seeded Hawks took care of business and advanced with a 2-0 victory. 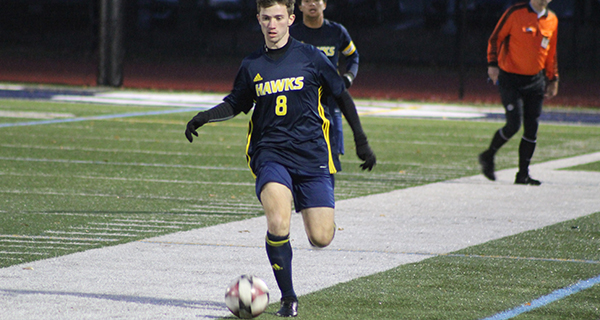 Senior midfielder/forward Adam Driscoll (8) moves the ball up the field late in the first half. Photos by Mike Flanagan

The game remained scoreless until 25:33 left in the first half, when Mungovan won a battle for a loose ball just outside the box, cut to his right, and from about 25 yards out, unleashed an absolute bomb of a right-legged boot into the top-right corner of the net to give Xaverian a 1-0 lead. The Hawks locked down the middle of the field throughout the remainder of the half and took their one-goal edge into halftime.

Mungovan, who scored the tying goal in Xaverian’s comeback victory against BC High in the opening round, stayed hot with his team clinging to a one-goal lead late. The sophomore buried a loose ball in the net-mouth to put the Hawks up a pair with under five to play, sealing the deal.

At the time of print, Xaverian gets set to take on No. 3 Brockton in the South semifinals on November 12 at .