Entering Friday, it had been quite some time since the Westwood High School varsity boys lacrosse team defeated rival DS; five years, to be exact.

Off to one of their best starts in program history, the Wolverines wrote the latest chapter of their exceptional beginning to the 2018 season by ending the long drought against the Raiders (3-3) with a 16-13 victory on a rain-soaked Nora Searle Field on Friday afternoon.

“We’ve never beaten DS during my time here,” said senior captain Jake Antonucci. “To come out here and put together a collective effort like that from the D, to C.J. [Adourian], to our midfield and attack, you can’t ask for more.”

Goaltender C.J. Adourian served as an anchor all afternoon for the Wolverines by churning out 11 saves. Senior captain Connor Deehan scored a hat trick and added two assists, while Antonucci scored a game-high eight goals.

DS scored the game’s first two goals, thanks to a low-to-high rip on a fast break by senior captain Michael Mastrobuono (five goals, four assists). Mastrobuono fired home his second of the game just moments later on a quick-stick at the crease to make it 2-0 in favor of DS.

Connor Deehan got Westwood on the board with a left-handed finish at the crease, but Timothy Polk fired home a goal off of the ensuing face off to push the DS lead back to two goals at 3-1 with 9:10 remaining. Antonucci launched home a shot stick-side to make it a 3-2 game with 8:40 to play before Deehan’s second of the contest on a left-handed rip tied things at three with 8:13 remaining in the quarter.

Polk’s second of the afternoon off of a feed from Mastrobuono gave DS back the lead at 4-3, but sophomore LSM Matthew Cawley tied things back up at four after receiving a feed from Deehan and depositing the ball down low with 2:35 to play. Antonucci’s second of the day on a cut and finish off-stick side gave Westwood its first lead of the game at 5-4 before goals by Conor Donohue with 44 seconds to play and Antonucci, again, to complete the hat trick with 21 remaining. The goals extended Westwood’s lead to 7-4 at the end of one.

Mastrobuono completed the hat trick with 10:05 left in the second quarter to make it a 7-5 game, but Antonucci unleashed a missile on a fast break to push the Westwood lead back to three goals at 8-5 with 6:06 remaining. Junior attack-man Ryan Healey made a defender miss and deposited the ball home via the five-hole with 4:30 to play to make it 9-5.

Polk completed his hat trick with a lefty finish at the crease with 3:55 to play in the half to cut the deficit to 9-6. Freshman LSM Andrew Dummer then fired home a goal off of a fast break on the ensuing face off to cut the Westwood lead to two at 9-7 with 3:44 to play. Just nine seconds after the goal by Dummer, Cawley scored his second of the day to put Westwood in double digits. Antonucci fired home a lefty bouncer with 3:06 to play to give Westwood a four-goal edge at 11-7. Mastrobuono’s fourth of the game made it 11-8, but Antonucci launched home a laser on the man-up with 2:14 remaining to give the Wolverines a 12-8 lead at halftime.

Junior midfielder and fogo Kevin Lyons wasted no time to begin the second half, winning the opening draw and streaking into the DS box before firing home a right-handed bouncer to make it 13-8. Polk scored his fourth of the game off of a feed from Mastrobuono with 11:32 to play to make it 13-9. Mastrobuono’s fifth of the day on a right-handed rip from 15 yards out cut the deficit to three for DS at 13-10. Erik Niit made it a two-goal game with a drive and finish at the crease off of a feed from Mastrobuono to make it 13-11 with 8:48 remaining in the third. Antonucci put an end to the 3-0 run by DS with a goal on the man-up with exactly three minutes to play, but Henry Kenney cut the deficit back to 14-12 with a right-handed finish up high with 1:10 to play. Westwood took their two-goal lead into the final quarter.

Antonucci extended Westwood’s lead to 15-12 with 8:33 remaining with an off-stick left-handed jump shot. Niit put home a rebound with 4:57 to play to make it a two-goal game once again at 15-13, but Deehan delivered a dagger of a goal up high off of pass from Lyons with 4:33 to play. Westwood was awarded a pair of man-up opportunities in the game’s final four minutes and killed the remainder of the clock to emerge victorious.

A humbled Antonucci credited his teammates around him, as well as his defensive poles and goaltender C.J. Adourian, following the big victory.

“The defense just played one heck of a game,” said Antonucci. “I just went where my coaches told me to be and the guys made some unreal plays and I was luck enough to put some shots home, I can’t take all the credit. Connor [Deehan], [Ryan] Healey, [Conor] Donohue, all the boys showed up today. Huge saves from C.J. [Adourian] all day long. They had the ball in their hands for probably 75 percent of the game, and our poles and goalie bailed us out at times. Just a really impressive performance by them.” 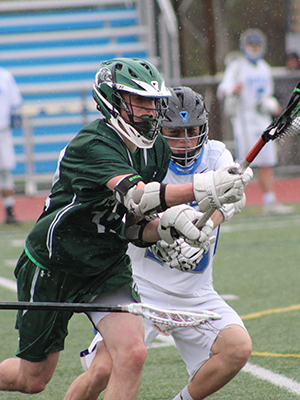