Walpole High School has pumped out a solid number of collegiate-level athletes over the years. On Thursday, a new wave of Rebels made it official as seven Walpole High athletes signed their National Letters of Intent to play a sport in college.

Pitchers and due-to-be senior captains of Rebel baseball, Cam Schlittler and Matt Donato, signed their letters of intent to play baseball in college, with Schlittler heading to Northeastern and Donato heading to Tufts. 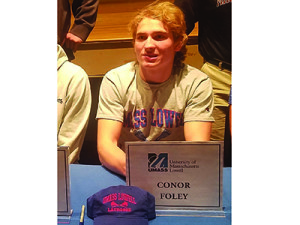 Conor Foley (pictured) now joins the elite class of former Walpole High lacrosse players such as Davis Butts and Ryan Izzo to go on and play at the Division I level. Photos by Twitter, @WalpoleAD 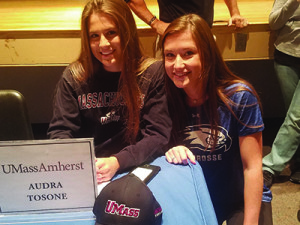 Audra Tosone (left) and Abby McLaughlin (right) will play together this spring on the lacrosse field before going head-to-head throughout the next four years at UMass and UMass Lowell. Photos by Twitter, @WalpoleAD 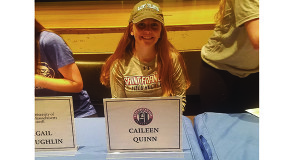 Caileen Quinn (pictured) is all smiles with her new lid and t-shirt after signing to play field hockey at St. Francis. Photos by Twitter, @WalpoleAD

After dominating the Bay State Conference for the better part of the last four years, Abigail Rae signed her NLI to play volleyball at Bryant.