The Walpole High School boys and girls varsity hockey teams were each victorious this past week over Braintree, both via a shutout.

The boys secured a 1-0 victory on the road against the Wamps on Wednesday thanks to a 29-save performance by senior goaltender James Corcoran, followed by a 3-1 victory over Natick on Saturday. 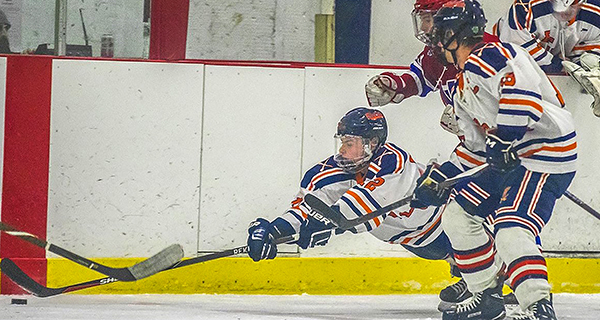 Junior forward Tyler Paige (12) leaps and extends his stick to knock away a loose puck in the neutral zone against Natick.

Walpole’s win on Saturday puts the Rebels at 18-0-1 on the season and masshshockey.com currently has Walpole ranked at No. 9 in the state. If the Rebels are able to win out and see any of the top-eight teams currently above them (Hingham, CM, Austin Prep, Central Catholic, BC High, Pope Francis, Arlington, Marshfield) lose in the next two weeks, the Rebels could very well make their first trip to the Super Eight in school history this March. If not, the Rebels will surely earn a very high seed in the Massachusetts State Tournament.

On the girls side, the lady-Rebels played host to the Wamps on Wednesday and earned a 2-0 victory behind a 26-save performance by senior goaltender, Frankie Bonanno. Sophomore Audra Tosone’s goal late in the first period gave the Rebels a 1-0 lead heading into the third period before sophomore Olivia Malone gave Walpole some insurance late to seal the win at 2-0. The win puts the lady-Rebels at 7-5-2 on the season and still well-within reach of a berth in the state tournament if they keep up their winning ways during the final stretch of the regular season.