Despite being without two of the top players in the state in Callie Hem and Lilly Doherty due to injury, the Rockets (11-4) were able to overwhelm the Wolverines in the second half with relentless offensive pressure and came away with a 14-6 victory. 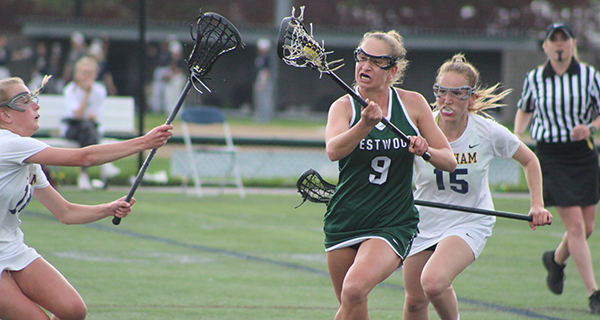 Kelley drew first blood for the Rockets just 2:11 in with a deflected shot that found its way past Westwood goaltender Anya Holland. The Wolverines responded exactly 2:11 later, however, when Alex Finn dodged from behind the cage and tucked home a shot through the legs of Needham goaltender Lily Callahan to even the game at one. McGowan then gave Westwood its first lead of the day with missile of a bounce shot with 18:22 to play.

Maeve Barker tied the game at two for Needham off of a free position restart with 16:52 to play before Kelley gave Needham back the lead at 3-2 by putting home a rebound with 13:35 remaining. Kelley added another with 6:35 to play to complete the hat trick and doubled Needham’s lead to 4-2 before netting another with 4:15 to play to make it a 5-2 game. Finn responded for Westwood with 1:43 to play in the half by firing home a feed from McGowan. A little over a minute later, however, with 40 seconds to play, Barker’s second of the game on a free position pushed Needham’s lead back to three goals at the half. 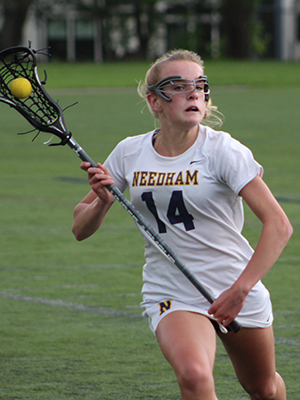 Elena Oberle (14) tip toes the sideline and rushes the ball up the field for Needham early in the first half. Photos by Michael Flanagan

Whatever adjustments Needham made at the break worked to a tee, as the Rockets began the half on a 7-0 run. Just 40 seconds into the second half, Abby Dateo fired home a goal on a free position to extend Needham’s lead to 7-3. Barker completed the hat trick with 22:17 to play to make it a five-goal game at 8-3. Dateo’s second of the half pushed the lead to 9-3 with 21:09 to play before Barker’s fourth of the game with 20:21 remaining put Needham in double figures.

Dateo notched the hat trick with 14:07 to play on a restart to make it an 11-3 game before Dana Fernandez fired home a goal off of a feed from Kelley with 10:17 to play to make it 12-3. Kelley’s fourth of the game gave Needham a 10-goal lead at 13-3 with 9:29 to play. McGowan stopped the bleeding with back-to-back goals to cut the deficit to 13-5 with 4:23 to play. Kelley put home her fifth tally of the game just moments later, however, as Needham went back ahead by nine goals at 14-5. McGowan scored her fourth of the game to cut it to 14-6, but the damage was too much for the Wolverines to overcome, and Needham prevailed with the eight-goal victory.