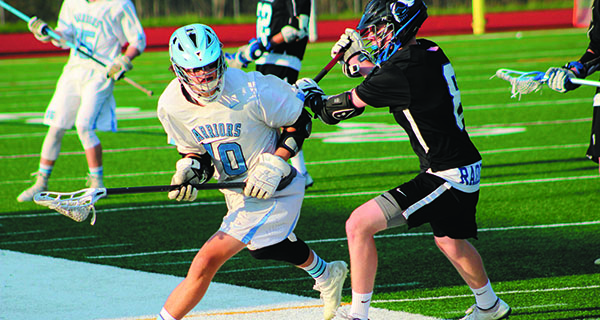 Medfield’s Mike Tyer (40) attempts to fight through a check from DS’s John Sveen (8) midway through the first quarter. Photos by Michael Flanagan

As is par for the course whenever Medfield and DS lax meet, last Thursday’s first of two meetings between the two powerhouse programs failed to disappoint.

Despite a 12-save performance in net by freshman goaltender Standish Carothers, the Raiders (6-5, 4-2) were unable to fight off a strong surge by the Tom Schofield-led Warriors, who clawed their way to an 11-9 victory over their archenemies. 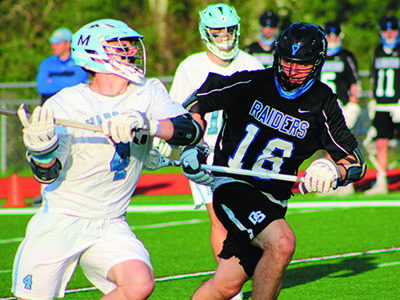 DS’s Ben Weitzman (18) defends against Medfield’s Tom Schofield (4) on a rush up the field early in the first quarter. Photos by Michael Flanagan

DS began the game on a 3-0 run kickstarted by freshman Pierce Gregory, who finished off a strong drive to the crease with a right-handed snipe up high to give the Raiders a 1-0 edge. Junior Timmy Polk doubled DS’s lead to 2-0 with a drive and left-handed finish with 1:46 remaining in the quarter before senior captain and Sacred Heart commit Jack Dillon fired home a goal down low with 30 seconds to play to make it a 3-0 game at the end of one.

The Warriors (9-5, 8-1) responded with a pair of goals to begin the second quarter. Freshman Jack Rideout launched home a goal up high off of a feed from sophomore attack-man Jimmy Cosolito to get Medfield on the board before Schofield fired in a right-handed rip from 12 yards out to cut the deficit to a single goal with 10:29 to play in the half.

Senior captain and midfielder Michael Mastrobuono extended DS’s lead back to a pair of goals at 4-2 with a drive and lefty finish with 8:26 to play in the half. Sophomore attack-man Jake Sherman battled through a nagging leg injury and fired home a goal off of a dodge with 6:34 remaining to make it a one-goal game at 4-3. However, Polk scored his second of the game with 4:37 to play on a steal during a Medfield clear attempt before firing the ball into the open net. The goal gave DS a 5-3 lead at the half.

Schofield’s second of the game just 39 seconds into the second half got Medfield back to within a goal, but Dillon responded a little over a minute later with 10:19 to go in the quarter to push the Raider lead back to a pair at 6-4. Junior midfielder Tommy Gill fired home a right-handed rip to get Medfield back to within a goal at 6-5 with 7:23 to play before Steve O’Leary tied the game at six with a lefty-bouncer with 6:20 to play. Schofield completed the hat trick to give Medfield its first lead of the game at 7-6 with 4:42 to play before Brian Abely fired home a low-to-high crank just 42 seconds later to make it 8-6. Gill launched home his second of the game from about 13 yards out with seven seconds to play to give Medfield a three-goal lead at 9-6 at the end of three.

Erik Niit cut the deficit to a pair of goals for DS with a finish at the crease with 8:59 to go before Henry Kenney made it 9-8 with a rip thanks to a feed from Mastrobuono just moments later. A left-handed shot from 12 yards out by Cosolito with 5:41 to play extended Medfield’s lead back to a pair at 10-8. Jack Dillon cut the deficit back to a single goal for DS at 10-9 with a drive from X and a left-handed finish down low with 3:29 remaining. However, Rideout delivered the dagger with just 47 seconds to play for Medfield after taking a feed from behind the cage by Mike Hauptman (three assists) and firing home a goal off-stick side to give the Warriors the lead at 11-9. Dylan McNally won the ensuing faceoff and the Warriors were able to chew the remaining seconds and emerge with the two-goal victory.