The Dover-Sherborn Regional High varsity boys soccer team kicked off its season on Tuesday night at home under the lights, and thanks to a strong collective effort highlighted by senior captain and forward Corey Lampman (one goal, one assist), the Raiders (1-0) began their season with a convincing 3-0 shutout of non-conference opponent Sutton in a very physical affair.

Not even 12 minutes into their season at 28:12, senior forward Michael Mastrobuono received a pass from Lampman inside the box and fired a shot up high to give the Raiders an early 1-0 lead. Just over seven minutes later at 21:04, Lampman extended the DS lead to two after taking a pass from fellow senior captain Jack Gardiner on a break, dashing in, and firing a left-footed shot off the far right post and in. 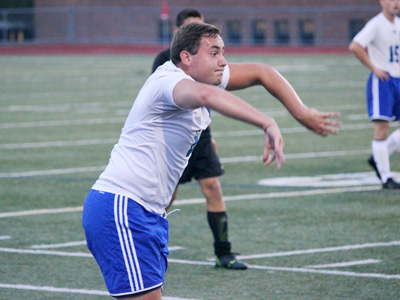 DS senior defender Mike Cellucci (pictured) heaves the ball towards the cage from the sidelines during an inbound early in the second half.

With the departure of 2016 starting goalkeeper Robbie Black, junior Jeb Shue got the nod in net for DS on Tuesday night, producing six saves on the evening. Shue’s leaping save on a Sutton free kick with just over four minutes to play in the first half allowed his team to enter the break still ahead by a pair.

Thanks to solid defensive play and awareness by sophomore defender Elliott Hammerness and junior defender John Muckstadt, the Raiders were able to hold off an early offensive push by Sutton to begin the second half. The Sammies desperately attempted to trim the deficit to one with furious amounts of pressure in the DS end. Another critical part of DS’s ability to escape damage in the early minutes of the second half was the physical, yet productive play of Lampman, who won the race to seemingly every ball and was not afraid to go into the dirty areas and fight for loose balls, allowing his team to retain extended possessions. 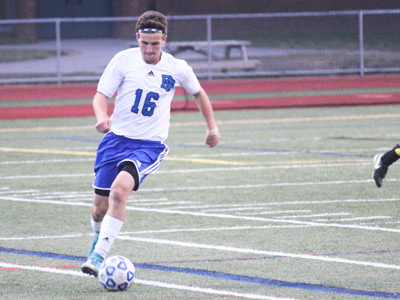 Senior captain and forward Corey Lampman (16) gathers in a ball and rushes up the field for DS midway through the second half.

With 19:46 to play, John Muckstadt delivered the dagger, heading in a corner kick by sophomore midfielder Adam Fam to give the Raiders a commanding 3-0 advantage.

Sutton made a push to try and salvage at least one tally on the night, but the defensive backfield of DS was too much to handle, as the Raiders completely clogged the middle of the field with bodies and made it almost impossible for a ball to make its way to the frame. Thanks to DS’s late defensive efforts, the Raiders were able to hang on for the 3-0 victory, as Shue was able to make two key saves in the final minutes to preserve the shutout.

The Raiders will look to stick to their winning ways when they host Ashland on September 15 at 3:45 p.m.